Did you just pick up a Deschutes IPA Variety Pack? Nice work!

Grabbing a friend or two and tasting all four IPA’s side by side is highly recommended – a mini tour spanning 30+ years of brewing experience, the results of continual exploration, trials, learnings, failures, and successes + a showcase of diversity within a single beer category. Yeah, that’s what you just purchased. 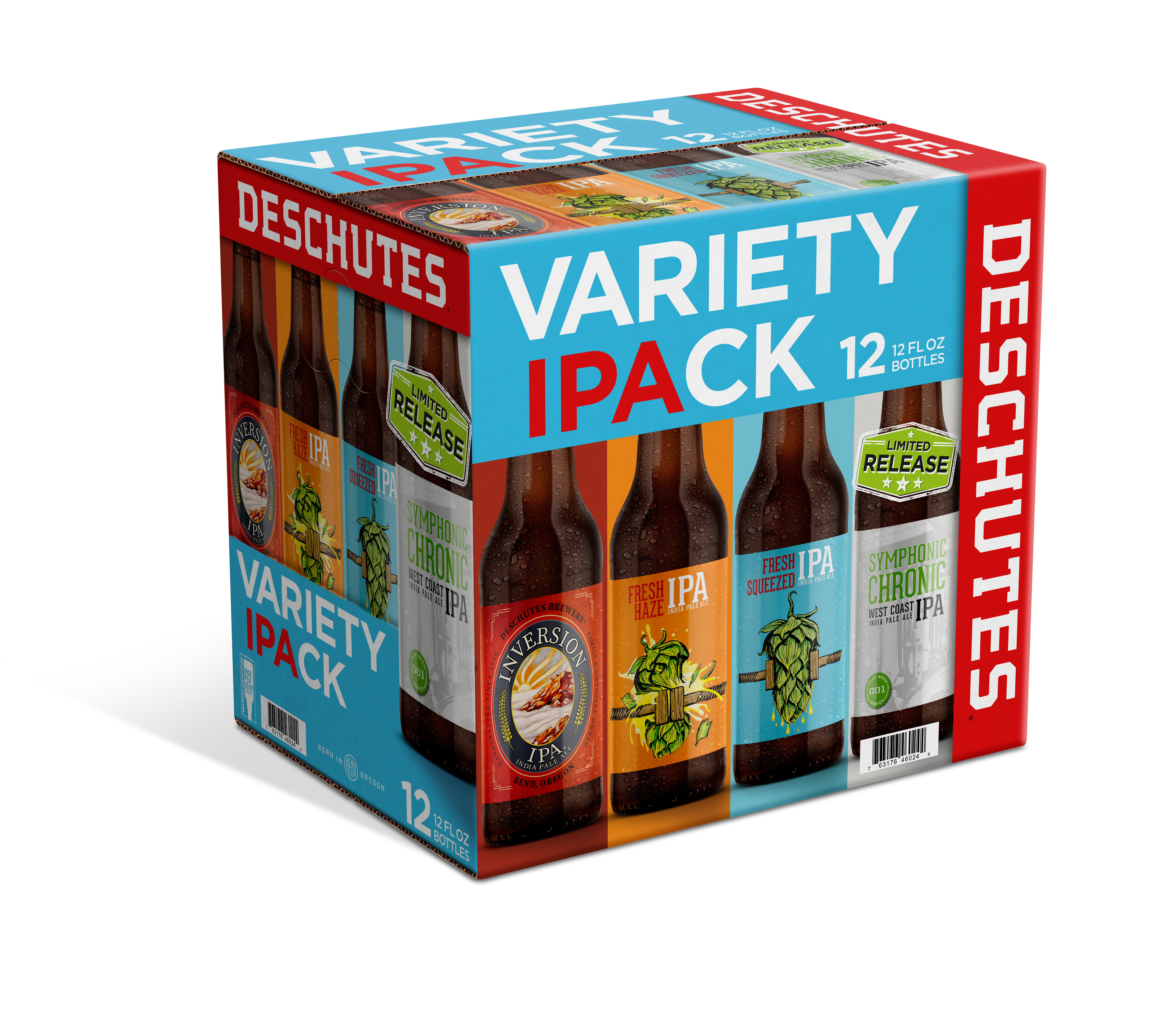 Most are relative newcomers in our 30+ year history with one time tested veteran hanging out in the pack just to make sure those wily new kids keep things under control. Let’s go backwards in time and start with the newest.

Symphonic Chronic. Do not forget Deschutes began as an English inspired pub in a small blue collar logging town and here we are now in 2021 making beers with names like Symphonic Chronic? Yup, kinda strange to think about. Half the ingredients in this beer didn’t even exist when our brewery was founded. Heck some of the hopping techniques didn’t even exist. We dry hop heavily with modern hops Strata and an experimental called Mosaic Lupo-MAX (both definitely were not around in the 80’s) at just the right time during the latter half of fermentation to pursue something called biotransformation – essentially another ask of the yeast, which is already busy converting sugar into alcohol and bubbles. Like your boss swinging by your desk around 2 pm on a Friday and saying, “oh could you also finish this before you get out of here”. But those yeast cells, all umpteen trillion of them, are team players, “Yeah, sure, have a good one”, and away they go, triggering another round of chemical processes that transform hop components into vivid new aromatics. The end result? An assertive mix of dank and resinous aromas melded with tropical and juicy notes – a West Coast / Hazy IPA combo that finishes crisp and dry. Have a sip, then taste Fresh Haze. Can you tell which one we let ferment further?

Fresh Haze. You are drinking tropical pineapple orange adult soda pop. Not really of course. Those fantastic aromas/flavors aren’t coming from syrups or flavorings but from the hard work of hop farmers, brewers and yeast. Bravo (fruity, floral), Cashmere (citrus, lemon, melon, herbal), Amarillo (oranges, citrus, floral) and Mandarina Bavaria (fruit, tangerine) hops take you there. Dry hopping yes, late brew house hopping yes – we actually did several trials to find the best placement for this cadre of hops – to get the most orange impact a reasonable person would enjoy in a beer. But what about that haze? Where did it come from? For centuries brewers have worked diligently to make beer clear and now people want it hazy? That is phenomenal news. Here is the formula: High haze potential ingredients like Wheat malt rich in proteins + brewers working less hard = hazy beer. Take a sip and note the brightness of the hop flavors and aromas then sip on Fresh Squeezed. Can you tell which we used high color crystal malts on?

Fresh Squeezed. High color crystal malts in an IPA? Ask your grandparents about it. Or drink a Fresh Squeezed. But it works! There’s something else beyond hops to savor and contemplate, to try and describe with any imperfect descriptors you can conjure. Citra and Mosaic hops star in this balanced IPA, an IPA we reengineered our Deutsch gemacht brew house for almost a decade ago to maximize the aromatics from these pungent varietals – seeking to saturate the wort with aromatic oils ripe with tropical, fruity, catty and citrusy potential. This was hot side, all before pitching the yeast and pursuing alcohol; all before we became cold side hopping converts, before becoming aspiring artists in the medium of dry hopping. These aromatics get darkened a touch by the caramel contributions of those crystal malts. A darker sweeter fruit – go back and taste Fresh Haze. Seem brighter? But Fresh Squeezed can travel confidently to places Fresh Haze cannot – savory American pub food. A pint of Fresh Haze next to a burger will look good on the Gram but your taste buds with culinary skillz will be saying WTF? “You can’t cover meat with orange juice fool!” Listen to them. Fresh Squeezed offers assertive bitterness to cut through fatty foods, cleanse your pallet allowing you to enjoy the next bite as much as the first, it offers caramel and sweetness that marries with any char, sear, or caramelization on your burger/steak/carne asada burrito. It does all this and offers a subtle compliment of citrus to elevate the entire experience. You have harmony vs. two separate sensory experiences. An epiphany.  Perhaps it’s a gateway experience, persuading you to dive into the world of food and beer pairing. Don’t believe it? How about this, set aside two consecutive nights where you eat burgers for dinner and one night you pair with Fresh Haze and the other with Fresh Squeezed. It will change you. If not, at least you have already meal planned for two nights.

Inversion. Speaking of epiphanies, we had one with this beer a few years back. Don’t change it. We had made some tweaks over the years to modernize Inversion a little but then we caught ourselves and said stop, just stop. Leave Inversion alone. Make a new brand that is modern, don’t change a classic. So we stopped and then made new brands that were modern. You just read about them. Inversion’s recipe is time tested and delicious, it uses timeless hop varieties Cascade and Centennial and it still takes plenty of our time to make it right. We travel hundreds of miles each year to select the best Cascade and Centennial lots. We arrive in Yakima, WA, we shake hands, we get led into a large room where numerous hop samples await sensory scrutiny. We are after the brightest expression of floral, citrus and pine on the table – we want these in Inversion, we want these tugging against the caramel notes from the blend of dark crystal malts used to layer in complexity and depth - the rope going nowhere – balance. Yes it’s another IPA that plays well with food, yes it’s another IPA that seeks balance, yes it may be the only beer in both your and your grandparent’s fridge, and yes it’s another IPA with dark crystal malts – which in some circles is now considered outdated, but like most outdated things it will likely come back in style and when it does you’ll instantly be hip, in case you weren’t already. 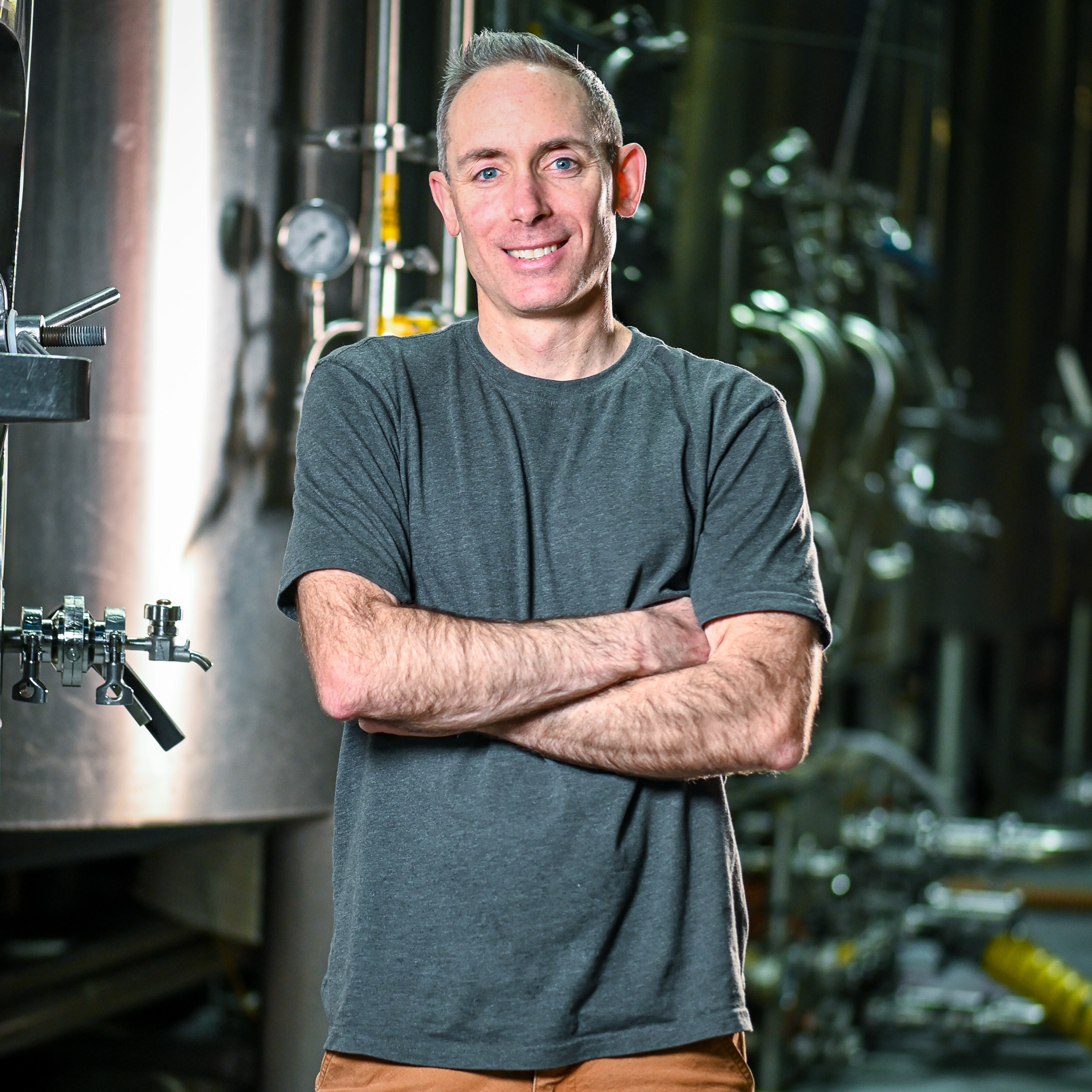