How It All Started

The story of Black Butte Porter goes back to the very beginning of Deschutes Brewery itself. 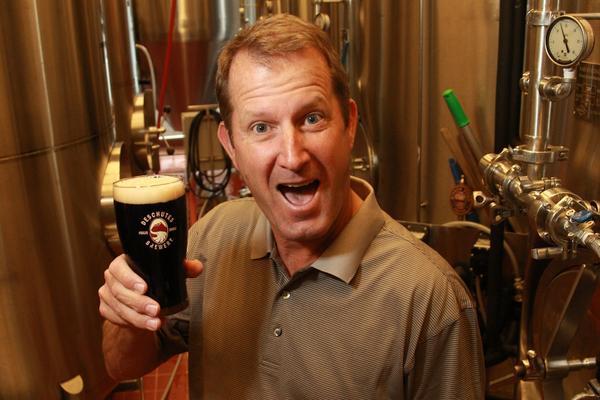 In 1987, we originally hired Frank Appleton, a brewing consultant from Canada to help us establish the brewing component of our planned brewpub in Bend, Oregon.  In addition to designing the equipment, and having it installed, he would formulate the first three beers in our line-up.  Not knowing much about it in 1988, we wanted something light, medium, and dark.  Frank came up with Cascade Golden Ale, Bachelor Bitter, and Black Butte Porter.  Our first brewer, John Harris, then put his hand (and considerable skill) on the formulation and Black Butte Porter was born.  However, it was not until sometime later that Black Butte Porter became our “flagship” beer.  After a year or so, and out of necessity to keep the brewery going, we began to explore wholesale distribution.  Thinking conventionally, we began with Cascade Golden Ale and Bachelor Bitter as being most adaptable to the limited palates of 1980’s drinkers.  It just seemed like lighter colored beer would make sense.

Once while meeting with our distributor in Portland, Oregon, Jim Kennedy, he posed a question.  He said, “You need to decide what you want to be as a brewery.  Now, you can sell these lighter colored beers and carve out your small but reasonable slice of the very large, light colored beer-pie, competing with everyone for that slice.  Or, you can sell Black Butte Porter and, although the dark-colored beer-pie is much smaller, you can own the whole thing”.  I guess being a contrarian at heart, that proposition appealed to me.  Although we had to sacrifice quite a bit to make that happen.  You see, the path of least resistance for beer salespeople was certainly not in dark beer.  Particularly when we had developed some really popular lighter beers like Mirror Pond Pale Ale.  But we were committed.  For the next few years, we kept the brakes on Mirror Pond and limited its market exposure to ensure Black Butte could gain a foothold in the market.  It didn’t hurt that it was winning awards at a pretty good clip in those days.  As a result, you could say we developed our second brand first, and we actually had two flagship brands with Black Butte and Mirror Pond sharing that distinction.
Black Butte Porter has continued to evolve, although our target flavors never really changed.  But with growth naturally comes change.  When we built our larger production facility in 1993, we installed a 50-barrel brewery.  Later, we added a German-manufactured 150 barrel brewery that was much more efficient.  Getting those two breweries to brew Black Butte Porter that tasted the same was quite the chore.  But, we’re pretty stubborn, so four years later, we declared success and the legacy (and flavor) of Black Butte Porter could continue.

Black Butte continues to be our flagship.  Even though beers like Mirror Pond Pale Ale and Fresh Squeezed outsell it.  Black Butte is the best-selling porter in America and a significant point of pride for our team.  It has successfully dispelled the misconceptions of dark beer.  It is particularly successful at that task with novice craft drinkers.  But, if we can get them to taste it, they are usually hooked!  It has also spurred spin-offs like Black Butte Anniversary that is an imperial version of Black Butte Porter brewed for our company’s anniversary, but being barrel-aged and topping out around 11% alcohol with various added adjuncts like chocolate, chilis or coffee.  We have also made a Black Butte Whiskey, with local distillery, Bendistillery.  We make the wash for the whiskey using a variation of the Black Butte formula for that wash.  Finally, we also do Black Butte3 where we use an imperial version of Black Butte Porter and age it in barrels that were used for Black Butte Whiskey.

Business consultants like to ask a question evaluating your business.  That is, “what can you do your competitors can’t?”  For me, the answer is clearly Black Butte Porter.  The legend will continue.  What we do with it next, well, stay tuned.