"Better For You" Beer Story

Deschutes Better For You Brand Story
By David Nilsen

One of the country’s O.G. craft breweries is beating the young guns at their own game by innovating within the Better For You space. New brews from Deschutes emphasize healthier lifestyle choices while still pushing the envelope on flavor, proving that even health-conscious folks can have their delicious beer and drink it too.

An Opportunity to Evolve
“I try at least once a quarter to put the boots on,” says Veronica Vega, director of product development for Deschutes Brewing. After years as brewmaster of operations, Vega’s current position sees her dreaming up new beers more often than brewing them herself. Still, she enjoys the occasional chance to brew on the brewery’s research and development system. Recently, Vega and her team have focused on the emerging market of health-savvy beer drinkers with new beers like Da Shootz, Wowza, and Lil Squeezy. “Five years ago we were still looking at beers from a brewer-creative standpoint, just brewing whatever our hearts desired,” explains Vega. “As brewers, we have to innovate at a faster pace now. We know that people are taking a closer look at their own health and wellness. That’s an opportunity to evolve our own portfolio.”

Things aren’t always what they seem in the beer world. The brightly-colored botanical motif on the Da Shootz American Pilsner can brings to mind a tropical paradise, but a closer look reveals flora and fauna native to Oregon, not Hawaii. Indian paintbrush, desert rose, and even a black bear make an appearance. And while craft beer often contains loads of alcohol and calories, Da Shootz weighs in at only 4% ABV, 99 calories, and 4 carbs. “Brewers tend to drink a lot of Pilsners in their time off,” jokes Vega. “Knowing that people are looking at calories and carbs, we decided to set some specs and brew one.” ‘Make a really delicious Pilsner’ was the only guideline I was given at first,” says assistant brewmaster Kyle Matthias, who handles most of the daily brewing on the R&D system. “That was when the Better For You space started to open up, and we had the chance to change it up a bit.” Matthias used the enzyme amyloglucosidase—popularized recently with the emergence of brut IPA—to convert more of the beer’s carbs into sugar that could be fermented out. The result is a crisp body that is light in more than one sense of the word. “A beer around 5% ABV might normally have around 150 calories,” explains Matthias. “Something like a session IPA, which people think of as a lighter option, might be around 120. This is 100.” The beer doesn’t skimp on flavor though, offering a bready malt base with bright but gentle citrus notes from the hops. Finding these exciting flavors in such a low-cal, low-carb, and low alcohol package makes Da Shootz unique, and positions the beer as the perfect worry-free, lighthearted option for hanging out with friends. “You don’t have to overthink this beer,” says Deschutes brand manager Stacey Payne. “We’ve got this covered. We overthought it so you don’t have to.” 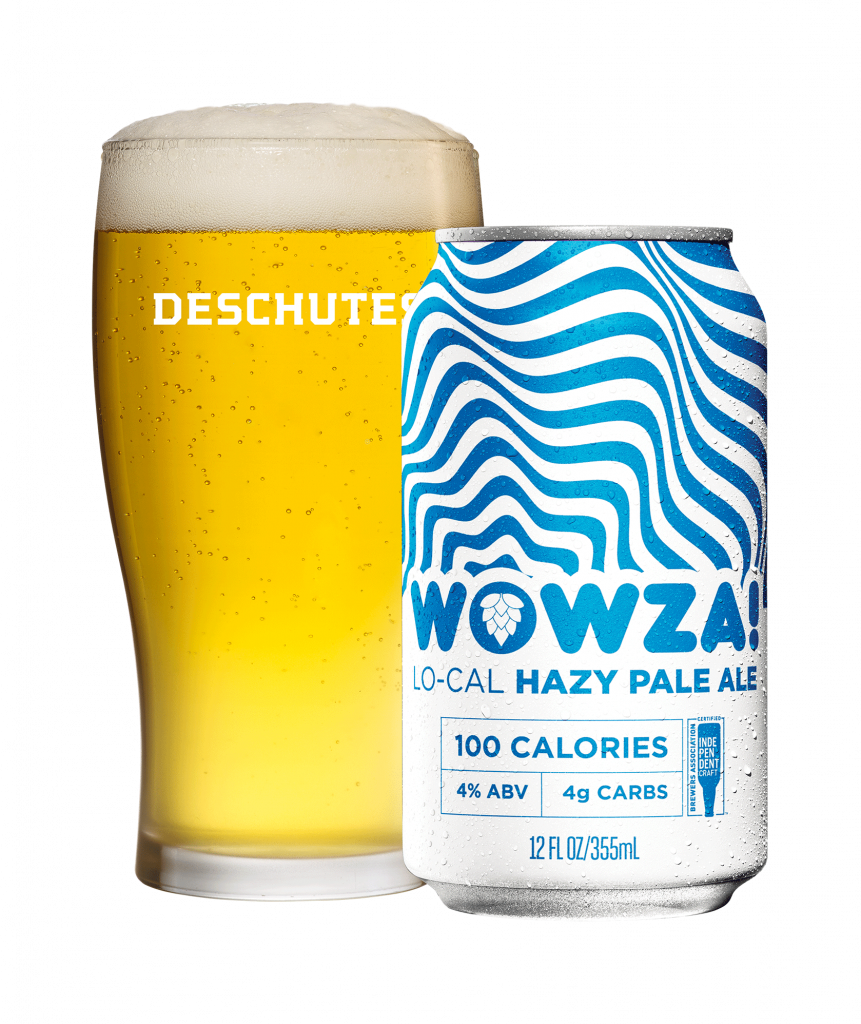 The current craft beer world belongs to the hazies, and we’re all just living in it. Deschutes launched Fresh Haze IPA in 2018 to fully enter that segment, and while their hugely popular Fresh Squeezed IPA may not be hazy, it’s certainly juicy. Now Deschutes offers all the juicy aroma and flavor of hazy pale ales in a 100 calorie, 4 carb, 4% ABV package with Wowza. “This beer allowed us to play with a trifecta of trends—hazy, health and wellness, and low alcohol,” explains Vega. The trick was getting the soft, full mouthfeel and slightly sweet perception that are hallmarks of the style while style keeping calories and carbs so low. The secret? Chicory root. Roasted chicory has been used for years to add complexity to dark beer styles like porter and stout, but Vega and her team weren’t looking for those flavors. “In its raw form, chicory has this really nice cotton candy sweetness,” she explains. “Hazies are so pillowy and big. We wanted to show you can still have that softer, sweeter, hop-forward mouthfeel because we did the hard work to reduce calories and carbs. 1 gram of carbs contain 4 calories. Chicory only has 1.2.” Hops run the show for hazies, of course, and Deschutes didn’t skimp here. Big additions of Citra, Simcoe, Cashmere, and Callista hops add mouthwatering flavors of candied orange, blackberry, and passionfruit. “It’s funny, the first thing people notice is the really big hop aroma,” observes Matthias. “You’ve got this balanced, rounded, complex hop aroma, and then when you’re drinking it you realize it has a light body. It’s unexpected for a lot of people.” 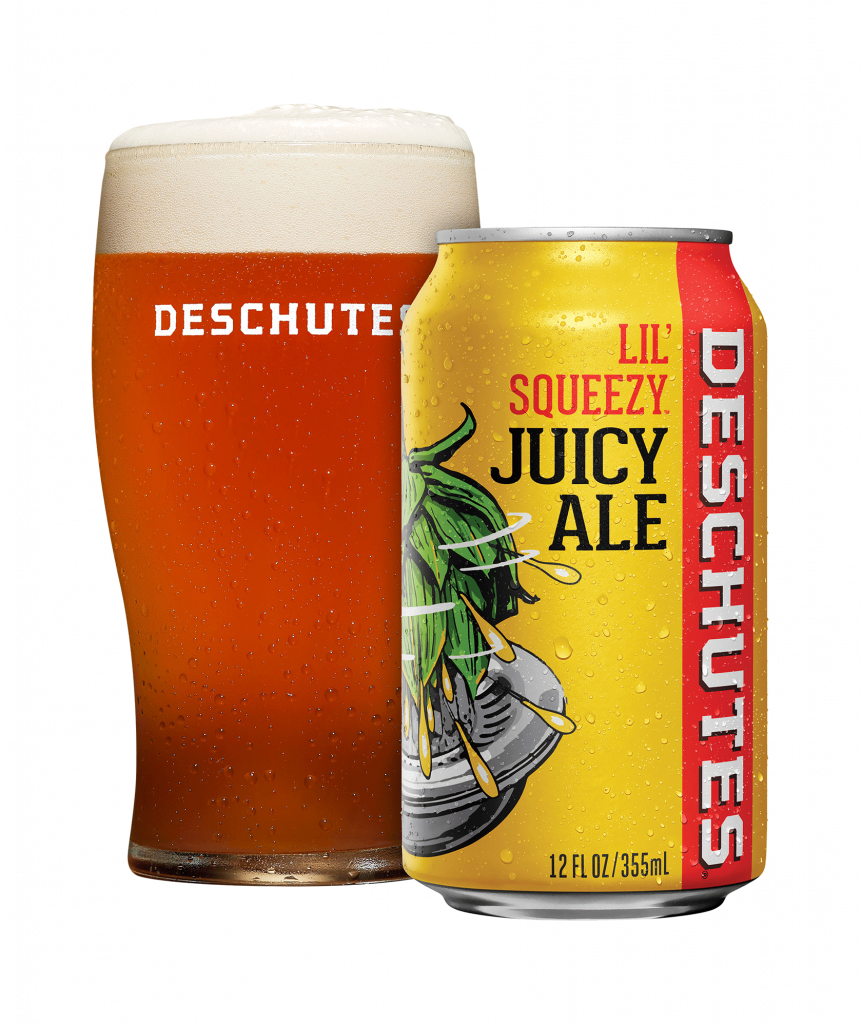 Deschutes has been working with gluten-free beer at their brewpub for a decade, and has even won a Great American Beer Festival medal in the category. They decided to shelve the idea of scaling a truly gluten-free beer for production for the time being though and shift their research to gluten-reduced beers. Lil Squeezy is a gluten-reduced “juicy ale” that’s big on hop flavor but has only 20 parts per million gluten. “We took inspiration from Fresh Squeezed IPA and put it into something different that still has all that juiciness,” says Vega. The beer is brewed with barley malt, but a protein-reducing enzyme is used that removes almost all gluten from the grain without affecting mouthfeel and flavor. “We brewed this beer without the enzyme and then with it, and then put it in front of people” says Matthias. “They couldn’t tell the difference.” The bold hop punch from Citra, Azacca, and El Dorado offers plenty of citrus and tropical fruit, while Chinook offers a touch of that classic West Coast pineyness. “Veronica refers to this as Fresh Squeezed’s lil sista’,” says Payne with a laugh. “She pulls it off, I can’t. That’s how we came up with the name.” When I asked Payne what words come to mind when she thinks of Lil Squeezy, she gets right to the point. “Juicy. Juicy, juicy, juicy.” She offers a few others and then doubles back.“And juicy again.”

Oh, Yeah, Definitely
Deschutes it hoping these beers will reach established beer fans who are changing their lifestyles as well as newcomers to craft beer who once saw beer as a poor health choice for them. “These can be great for someone who is ‘craft-curious’,” says Payne. “They can be for those folks who are interested in craft, but maybe have barriers in their minds that craft is too heavy, too high alcohol, too high calorie. These give them an accessible entry point.” Da Shootz and Lil Squeezy hit the market in 2019, and Wowza is rolling out currently. With the early success of these lines, similar beers can be expected from the esteemed Oregon brewery in the future, including non-alcoholic or super-low-alcohol beers. So what was it like for these seasoned brewers to work on healthy-conscious beers instead of barrel-aged stouts or 9% ABV triple IPAs? “I think when I was younger, I only wanted to brew what my heart desired. Now, I see something like this as an exciting challenge,” says Vega of brewing full-flavored beers that are better for you than conventional beers. “I realized I could open my palate and my toolbox and create these different styles,” recalls Matthias. “Once you learn how to craft something like this and make it delicious, it flips on its head. I went from not sure to, Oh, yeah, definitely.” Deschutes hopes that Oh Yeah echoes across the country. Who knew smarter decisions could taste so good?