Deschutes 2020 Beer Release Calendar
In 2019, we welcomed new, innovative beers to our lineup. With 2020 right around the corner, we are excited to share what we're brewing in the new year. Because it's so fun to say: NEW YEAR, NEW BEER! 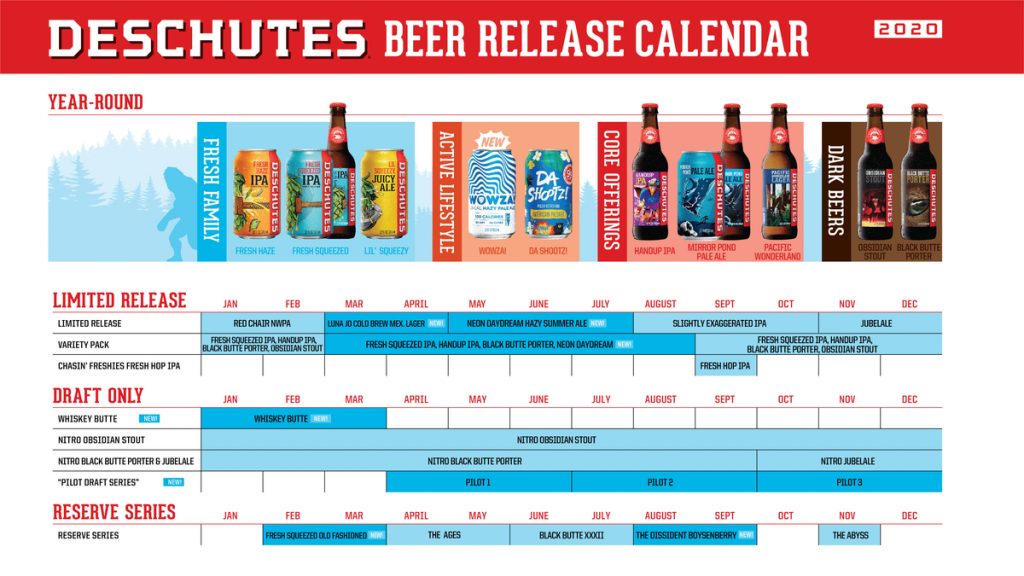 Dates may change slightly, certain markets may receive products at different times, and seasonal transitions are always in flux.

A brand-new Hazy Pale Ale that’s 4% ABV, only 100 calories and 4g of carbs and uses Chicory Root to balance the body of the beer without affecting the calorie count.

Teensy is a petite hazy adding a low alcohol offering to the brewery’s mainline brands. This low ABV hazy has a strong, hop and fruit-forward flavor with a light body for ultimate drinkability.

Celebrating friendships and next level experimentation in coffee and beer, Deschutes partnered with local Bend, cold brewed coffeeâ€‹ company, Riff, in a collaboration resulting in an unexpected pairing of a light-bodied dark Mexican- style lager that matches beautifully with vibrant coffee aromas and flavors.

A hazy summer ale that radiates like the glow of light behind closed eyes on a long summer day. Brewer’s experimentation with new yeast strains, new hop combinations and brewing methods led to this amalgamation of wheat, white, and hazy pale styles with aromas of orange, lemon, and fruity esters and a zesty, citrus hop flavor.

A collaboration with Travel Oregon that captures the magic of Oregon like a whimsical fairy tale in a bottle with a slightly exaggerated tropical hop profile from the extraordinary Sabro hops.

A bright, clean and crisp IPA that showcases a new hop every year that goes from vine to kettle in a day!

A festive winter ale full of spice notes and a robust malt character of toffee and dusted cocoa.

Joining the journey across barrel ecosystems with Planete Bruin and Planete Rouge, Planate Plum is a complex American Sour Red Ale brewed with Oregon plums. Partially aged in brandy barrels, Planete Plum has notes of cherries and dried fruits that combine with farmhouse aromas balanced by the plums.

Inspired by our citrusy Fresh Squeezed, this hop-forward ale gets an Old Fashioned twist with sweet orange peel and bourbon barrel aging.


We have limited releases available only at Deschutes Brewery Pubs and Tasting Rooms in 500 ml bottles.

Tumalo Kriek 6% ABV|10 IBUs – in honor of the Deschutes River’s tributary and the brewery’s water source, Tumalo Creek, this Northwest version of a Belgian-style Kriek is a mixed culture sour ale aged with Oregon cherries.

The Deschutes Sour Series is a new, innovative and creative series of stainless, lacto soured beers that vary in the use of fruit, hops, spices and specialty ingredients that all maintain a harmonious and clean mild to medium acidity. This series satisfies an emerging interest in kettle sours, and a movement toward fruit-flavored beers delivering a culinary-inspired and truly unique offering. Almond Oat is the first in the series launching in April that include notes of a Biscotti-like almond and cookie malt character in the aroma that finishes intriguingly tart with a balanced sweetness. Next up will be a Guava Catharina Sour as well as new additions that are currently in development.